Not All Calories Equal, Study Shows

A diet based on healthy carbohydrates—rather than a low-fat or low-carbohydrate diet—offers the best chance of keeping weight off without bringing unwanted side effects, a study published Tuesday in the Journal of the American Medical Association suggests.

Study participants following a low-glycemic-index diet, which is similar to a Mediterranean diet and focuses on fish, fruit, vegetables, nuts and whole grains, also saw improved cholesterol levels and other important markers that lower the risks of developing heart disease and diabetes. Such a diet might include minimally processed oatmeal, almonds, brown rice, beans and healthy fats like olive oil, among other foods.

The study was led by researchers at the New Balance Foundation Obesity Prevention Center at Boston Children’s Hospital and funded by the National Institutes of Health and the New Balance Foundation, which is affiliated with the athletic-shoe maker. It was designed to assess how each of three common diets affects the ability to keep weight off. Participants had all of their food prepared for them, and their food intake was monitored. They ate many meals at the hospital, picking up others to eat at home. 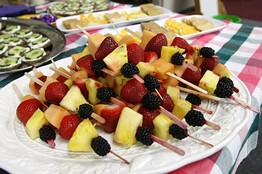 David Ludwig, one of the study’s authors and the director of the center, explained that most people struggle to keep weight off. Previous studies have shown that weight loss reduces the body’s daily energy expenditure—or how many calories the body burns through activity and just by resting—making it easy to regain weight. Dr. Ludwig’s study was designed to look at the impact of the three diets on measures of energy expenditure, in addition to assessing hormones, fat levels in the blood and other health markers.

The study’s 21 participants, 18 to 40 years old, initially lost 10% to 15% of their body weight during a three-month diet that contained about 45% of total calories from carbohydrates, 30% from fat and 25% from protein.

“The low-fat diet had the worst effect” on energy expenditure, Dr. Ludwig said. Participants on that diet also had increases in triglycerides, a type of fat, and lower levels of so-called good cholesterol. “We should avoid severely restricting any major nutrient and focus on the quality of the nutrient,” he said.

Dr. Ludwig said those on the low-carb diet had the biggest boost in total energy expenditure, burning about 300 calories more per day than those on the low-fat diet—about the same as an hour of moderate exercise. But that bump came at a cost: increases in cortisol, a stress hormone, and a measure of inflammation called CRP, which can raise the risk of developing heart disease and diabetes.

Those on the low-glycemic-index diet burned about 150 calories a day more than those on the low-fat diet without any negative impacts on cholesterol levels or various hormones, making it the ideal diet, Dr. Ludwig said. The glycemic index measures the impact of carbohydrates on blood-sugar levels.

A second study in the same medical journal showed that people in an 18-month weight-loss program that started with monthly meetings lost nearly as much weight as those in a much costlier program of the same duration with group sessions that initially met weekly. That study, led by researchers at the University of Pittsburgh, found that the monthly program cut about $600 off the cost of a $1,360 traditional weight-loss program with the weekly classes.Members of the group taking monthly classes were mailed the same material as those who attended classes weekly, and those who failed to meet weight-loss goals could get individual counseling by phone or in person.

A version of this article appeared June 27, 2012, on page A3 in the U.S. edition of The Wall Street Journal, with the headline: Not All Calories Equal, Study Shows.

2012-06-30
admin
Previous: Antibiotic Use Among Children Declined in Past Decade
Next: Tips for Heartburn and Acid Reflux Relief